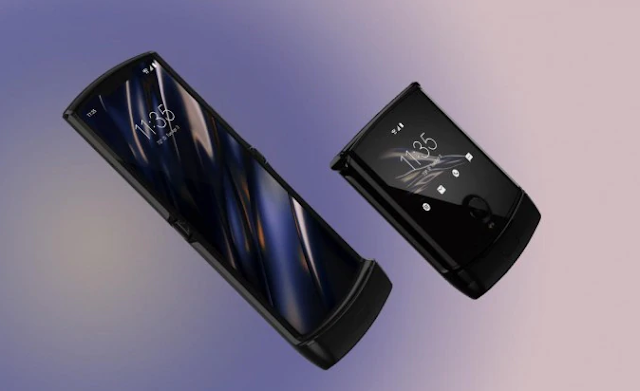 Motorola has brought back all the nostalgic memories of "great" Razr phone by relaunching it in 2019 with foldable touch. Like Galaxy Fold, this one is foldable too but carries the design of old Razr flip phone. Comparing it to Galaxy Fold might not be right here as this one only comes at $1500. But, is it having premium software [plus hardware combo at this price? Let's check it out in the Motorola Razr 2019 review:

The Razr 2019 has inherited properties from the old-school Razr. It is a flip device with a hinge in between. It isn't like an old device when it comes to flipping. It is harder to open as it is denser and wider than old Razr. Just a mild reflection of real OG! The nostalgia is still felt and with the new specs, we get the modern smartphone with old nostalgic design. The central display is not bigger and is just as another device and its resolution are not that great as well.

The device folds in ‘hamburger-style ‘and the clasp action are properly balanced when you close or open the device. You can get a great discount on electronic devices online using cover it up coupons.

The smaller screen on the top allows you to see and give a glance to every notify. Instead of opening the phone, again and again, you can get every important message or notification on the go.

The rear-panel is metal built and the phone doesn’t support wireless charging. The device fits easily in your palm. There is a textured metal back and glass cover on the front with a smaller “quick look” display. Under that, you see the rear camera; which turns into the front camera when closed.

The bottom lip is the Razr chin housing the antennas, speakers, bottom USB-C port, and fingerprint touch sensor. There is no facial unlocking on the device. Along with it, there is no slot for expandable storage or SIM cards and a 3.5mm headphone jack. The volume rocker and lock button are on the right side.

The Razr 2019’s is packing a pOLED HD (2,142 x 876) interior display with a 21:9 aspect ratio. The screen lacks sharpness. If you want it to watch movies and TV series, it might disappoint you a bit. Unlike the Galaxy Fold, the Razr’s screen doesn’t have a visible seam. At this price, this Razr screen is great but not impressive.

The front screen takes you back to the old times - like the old-school Razr. The new Razr has a 2.7-inch 800 x 600 display. It’s way sharper than what you would have expected and selfies.

The Razr 2019 packs a single 16MP rear camera, which works well. Like we saw in Moto Z4, where Moto dropped one lens and improved software for better images, it is not the case here. There is no multi-cam setup here sadly but it would have become too messy if the demand was satisfied. Small device and too many cams - a mess! That said, photos coming out from the device are decent. There’s also a 5MP front-facing camera that takes decent selfies. There is nothing to go gaga over this phone's camera as they just function fine.

Under the hood, the Razr 2019 packs a Snapdragon 710 chipset. It isn't as fast as the advanced Snapdragon 855 in the Samsung Galaxy Fold., Why didn't they go for it? Only Motorola knows! Just because the bigger chipset would have drained the battery faster and then, people would have complained about battery life. Also, the heat generated couldn't be handled by this 7mm thick sandwich design. Hence, the Razr team opts for Snapdragon 710.

The Razr 2019 runs Android 9. While it misses out on the advantages of Android 10, it doesn’t need the foldable compatibility tweaks made for the latest version of the Android operating system. And, it isn't like that. You can apply for Android Developer Jobs to know about this field.

The Motorola Razr 2019 brings back the memories but is a bold experiment. Yes, we feel nostalgic after its return. But, this return costs $1500 still! It might be a low price for foldable ones but it is having its cons. In many ways, the new phone inherits the old Razr’s repo and design but the software and under the hood gizmos could have been packed better to make it more powerful.

Only Snapdragon 710 SoC, 2,500mAh battery capacity, decent cameras - are they enough for the foldable high-priced device? Folks who will be wanting to get the same nostalgia, they will buy it. Practically, it is a low-powered phone launched with an old Razr reputation.