7 Best Features of Android 11 for Its Users 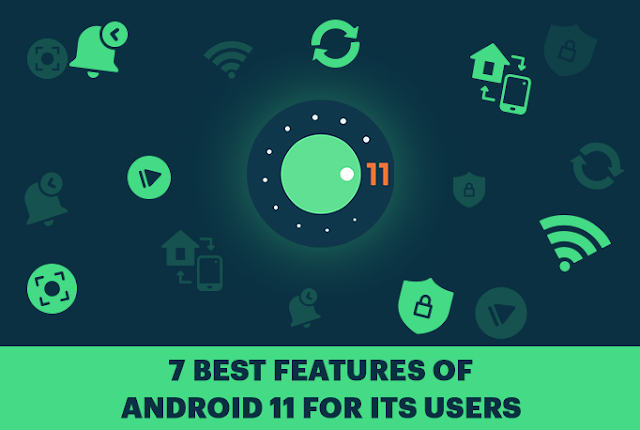 The latest version of Android is introduced in the market officially as Android 11. The new version is available in Google Pixel devices and other manufacturing devices like OnePlus, Realme, Xiaomi, Samsung, etc. It isn't easy to locate differences in Android 10 & 11. However, some features boost up the functioning process on the platform. For developers, it is crucial to fathom the new characteristics for a smoother operating system. It also offers customization of features to developers for an effective developing process. Nevertheless, the users also have a set of features that they can use to administer their smart devices. Therefore, mobile app development holds several advantages for users and enterprises to manage their privacy on a trusted technology platform such as Android.

Android 11 Best Features for Its Users to Operate Easily

Here are the top features listed in detail for Android users to practice without any difficulty on the platform.

Media controller is not a notification but an app or a tool which does not require to take up space in the notifications bar. Therefore, in Android 11, if you pull down the drawer, you can see the small button for the media controller. The drawer shows the app's association with the cover art, the system in which the media is playing, and the basic controls. You can push the phone speaker/playback system and move the video or audio to a new space for a better experience. Moreover, from the settings, you can select the media controller tool option to disappear as soon as you stop playing the player instead of swiping away. Finally, switching to Bluetooth speakers from phone speakers is made easier in Android's latest version.

With multiple screens recording apps in the Google Play store, Android is a little late with the feature in its latest version. However, from this, you will need to download one less app on your mobile phone. The option of a screen recorder is available in the quick settings drawer, and when you tap, you avail some options before the recording starts. Some of the options include audio to record, or if you require to show the screen-taps in the recording. It is one of the simplest features of Android 11 with not so complicated setting options. Hence, it reduces the number of apps you download on your smart device saving ample storage space.

There are several smart home technologies incorporated in today's market trends. Google added a new feature in Android 11 to manage your devices anywhere without using multiple apps on your mobile phones. The other element of the latest version includes pressing the power button to launch a new tool. At first, there will be a feature specifically for the power button with various other options on the top. It also consists of a Google Pay shortcut, enabling you to select a payment option to conduct transactions quickly. Along with it, you can see buttons for smart home products connected to your mobile device from which you can check your security camera, lock or unlock doors, turn on or off lights, and manage various other activities without any hassle.

Auto-Reset and One Time Permission

In the latest version of Android, the developers have provided the best security and privacy features. The most appreciated initiative of the following element is one-time permission. In Android 10, permission was asked for all the time to run the app. However, in Android 11, the permission process is granted as per the sessions only. Thus, it is helpful for the user to reduce battery drainage through the backend once the app is closed. Moreover, the top Android app developers have provided strong security, making it difficult for sneaky apps to hack into your phone to obtain personal information.

Auto Android is a system with several benefits, but connecting your phone with it is the most tedious. Pixels is the only one which can be connected wirelessly to it. However, Android 11 has made it easier for all phones to connect with Android Auto. It holds only one limitation that the car's head unit needs to support the feature for a smooth operating system. Therefore, the specific quality might be difficult to use if someone owns a car a few years older.

When you use an Android work phone, it is probably a part of the Android Enterprise program. The phone is connected with IT servers, making it easier for the company to track your phone activities. Thus, you had to carry a separate mobile phone for personal use. But with Android 11, you can hold an individual and work profile without harming or connecting the two, maintaining privacy for every feature. Thus, they can swap from work to personal profile without privacy invasion from the IT department's monitoring in the private system. Moreover, it benefits the business in holding an Android app for their online business course to provide a smoother operating system to their product or service users.

The smart features of Android 11 have given a boost to the platform in the market to compete with other operating systems like Windows, IoS, and Linux. Therefore, if you wish to curate an android app for your enterprise, you need to outsource from a skilled and experienced team. One such platform like GoodFirms is where you can find a group of mobile app developers in India with quality results as they are experienced in curating varied android mobile applications over the years.